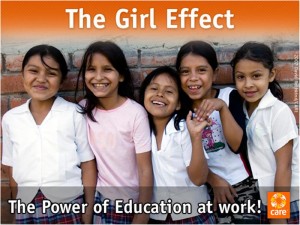 THE GIRL EFFECT, n. — The powerful social and economic change brought about when girls have the opportunity to participate.

The focus of this blog has been on women’s consumerism and marketing to women.  But in looking at the power of today’s women, we can’t ignore the power of the next generation of women around the world.  I recently connected with a wonderful program called The Girl Effect – perhaps the greatest untapped solution for young girls in developing nations.

An adolescent girl is uniquely capable of raising the standard of living in the developing world and the community in which she lives: she will reinvest her income and knowledge back into her family and her community. As an educated mother and an active citizen, a girl will break the cycle of intergenerational poverty.  That’s The Girl Effect.  But despite her proven potential, she is also more likely to be uneducated, a child bride, and exposed to HIV/AIDS. Less than two cents of every international development dollar is directed to adolescent girls.  And excluding these girls doesn’t just impact them, but the world at large.

The Girl Effect is the powerful social and economic change brought about when girls have the opportunity to participate. It’s an untapped force in the fight against poverty, and it’s driven by champions around the globe: the Nike Foundation, the NoVo Foundation, the UN Foundation, the Coalition for Adolescent Girls, CARE, Plan, the Population Council, ICRW and the Center for Global Development – and many others.

Little research has been done to understand how investments in girls impact economic growth and the health and well-being of developing communities. This lack of data reveals how pervasively girls have been overlooked. For millions of these girls, there have been no systems to record their birth, their citizenship, or even their identity. They are virtually invisible.  However, existing research suggests their impact can reach much further than expected.

What can you do? Help make these 600 million girls visible by becoming a fan of The Girl Effect on Facebook. Tell the world that you think these girls deserve better – for themselves, and for the end of poverty.

Does “Mancession” Mean Women Will Lead the Recovery?

Is Consumer Spending by Women Driving the Economic Recovery?

The 2007-2008 recession has hit men so much harder than women that it has even coined a new phrase:  the Mancession, according to a recent Newsweek article.

Men are the victims of two thirds of the 11 million jobs lost since the recession began, primarily because they work in industries like construction and manufacturing that were most severely impacted by the recession.  According to economists, they also will face a much more difficult road to recovery than their female counterparts.

American women already are the breadwinners or co-breadwinners in two thirds of their households, and it is predicted that by  2024, the average woman in America  will make more money than the average man.

The Nuts and Bolts of Women Consumer Spending

American women are responsible for 85 percent of all consumer purchases; they hold 93 percent of U.S. bank accounts, 51 percent of all personal wealth, and are worth more than $7 trillion in consumer spending power—more than the entire economy of Japan.  On a global level, women are the biggest emerging market in the history of the planet—more than twice the size of India and China combined. It’s a seismic change, and by all indications it will continue: of the 15  job categories expected to grow the most in the next decade, all but two are filled primarily by women.

Such a drastic shift hopefully will result in corporations sitting up and taking notice—and ensuring their products and services appeal to female consumers. Brands need to pay close attention to how they’re marketing to women, because ultimately it may be the female consumer that pulls us all out of this “mancession.”

Why Would Brands Ignore These Women?

The other night I got together with several of my friends for an evening of girltalk. One friend is a mom and business owner who recently bought a new car.  Another is an empty-nester who just purchased a refrigerator and dryer.  A third is a recently-divorced healthcare industry executive who just bought health insurance for herself and her daughter.  And finally there’s me: the CEO of a marketing company who last month purchased new office equipment and a widescreen TV.   All of these purchases were made by Boomer women, without input from a spouse or significant other.

Because I’m a Boomer woman and specialize in the marketing-to-women space, I’m particularly conscious of how I’m treated by brands.  And while I am of a certain age, I’m certainly not ready to be stored in the attic.  And neither are my friends.  Yet, as Boomer women we’re continually marginalized by brand managers (primarily male) who don’t think any women of value exist over the age of 39.

What they must realize is that those inconsequential 45+ women are the ones that have the most money to spend on everything from vacations, to new homes, and from cars to cosmetics. Some interesting statistics on the purchasing power of Boomer women:

In addition, this group of women will experience the largest population growth over the next 10 years, and the largest transference of wealth from inheritances left by parents and husbands. Yet rarely if ever does one see a marketer’s target audience that extends beyond the age of 49 unless it’s for the senior market.  Why?

Marketers and the media need to finally realize that the women most ignored are the ones who can do the most good in an economy that continues to struggle.  The time of patronizing ads and ignorance is long gone.

Does your brand ignore the largest and fastest-growing spending segment of women?  Or are you one of those women that are being ignored?

A few posts back I touched briefly on how the book What She’s Not Telling You highlights an interesting behavior by the female consumer –– the habit of telling the “half truth” vs. the “whole truth.”  Understanding this concept is so important to marketers that I decided to revisit.

Buying into a woman’s “half truth” can cost marketers billions of wasted dollars; not just in concept development and market research, but in the marketplace where it really matters.  A half truth is what a woman is willing to admit, while the whole truth is what she really believes, does and buys. For example:

An example of how a half truth can negatively affected a brand is Dove’s “Campaign for Real Beauty.” This campaign broke the rules of the beauty business by putting less-than-perfect women in their plain white undies all over billboards, the media and the Internet.  Talk shows went crazy and Dove was hailed as the brand that “gets it”.  The PR value of the Real Beauty campaign was unparalleled.  But soon after,  Dove’s sales slowed and eventually flatlined.  Why? Because Dove fell for the half truth that women want to feel good about their natural looks.  But the whole truth is that women really want to look better than they do, which is why they spend $7 billion annually trying.

On the flip side, Procter & Gamble’s Oil of Olay identified this whole truth:  “Just because I’ve earned these facial lines doesn’t mean I want to wear them,” and marketed their Pro-Age Regenerist product based on the whole truth that women want beauty products that really work.  They marketed Regenerist as an alternative to invasive cosmetic surgery, and the launch became the biggest skin care launch in the mass market.

Are you identifying the whole truth when marketing to women consumers?  What half truths have you told a brand?

Female Consumer Behavior and a Word About Half-Truths 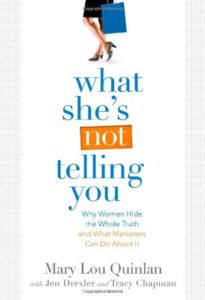 What She’s Not Telling You: Notes on Female Consumer Behavior

At this year’s Marketing2Women conference, the authors of “What She’s Not Telling You” unveiled a critical behavior among female consumers: the tendency to disclose Half Truths (what they are willing to admit) and to hide Whole Truths (what they really believe, do and buy).

As the most powerful consumers on the planet, women are the voices on the customer service line, the fingertips on a website, and a brand’s most powerful alliance.  Unfortunately, many times they’re only telling a portion of what they’re really feeling.

Example: for years women 40 years and older have voiced frustration at not being able to find age-appropriate clothes. Enter the leaders of The Gap, who created “Forth & Towne,” a chain of stores for boomer women with “age appropriate” sizing and styling. Unfortunately, Gap neglected to ask the boomer women the question that would have led to the Whole Truth:  What age do you consider yourself?   Had they done so, they would have found that lots of those 50-year old women saw themselves as around 35 years of age, which translates to clothes and stores that balance comfort and cool.  As the book says, R.I.P. dowdy Forth & Towne.

Another Half Truth told by many women:  “I try to be healthy.”  The Whole Truth:  “I exercise (when I feel like it), watch what I eat (sometimes), don’t smoke (too much), and wear sunscreen (when I remember).”

Half Truths are a habit — they cut the conflict and smooth the way.   They are not meant to intentionally deceive, but are shortcuts that allow women to get on with their busy lives.  Marketers need to recognize those Half Truths and dig to find the bigger Whole Truth, or the result will be unremarkable products, mediocre communications and mundane retail experiences.

The Financial Power of Women Continues to Grow

The Growth of Women’s Financial Power

Men.  Who needs ‘em?  A recent Newsweek article noted that women are the ones driving the shopping –– and, economists hope, the recovery.  That growth represents “the biggest emerging market in the history of the planet,” according to the article –– more than twice the size of the two hottest developing markets: India and China.

Really?  Really? Hasn’t this song been sung by the enlightened for many years now?  Is this still news?  It’s true that women no longer are the “minority” market so many companies have considered them for decades.  They are, in fact, the majority market.  Yet many marketers still refuse to recognize the importance of women’s purchasing power.  Are they afraid that, by targeting and building relationships with women, they somehow will lose men in the process?  If that’s the case, they couldn’t be more wrong.  Because the reality is, when you meet the needs of the woman, you more often than not exceed the needs of the man.

Women clearly are the major consumers in far more than traditional female categories.  They purchase, or influence the purchase of, 91% of new homes, 66% of PCs, 92% of vacations, 65% of new cars, 93% of food and 89% of bank accounts.

All too often, the opportunity to engage female customers is missed because marketing strategies are drawn up along masculine lines that fail to recognize the differences between male and female purchasing motivations.

It doesn’t matter whether it is cars, cosmetics, or even products for men –– female consumption power is the leading consumption power in the world.  Any company that overlooks women as the primary purchase decision makers is making a huge mistake.

So my question is –– are marketers still not getting it?  Or is the tide finally turning?