The Quirk Theory: Why Outsiders Thrive After High School 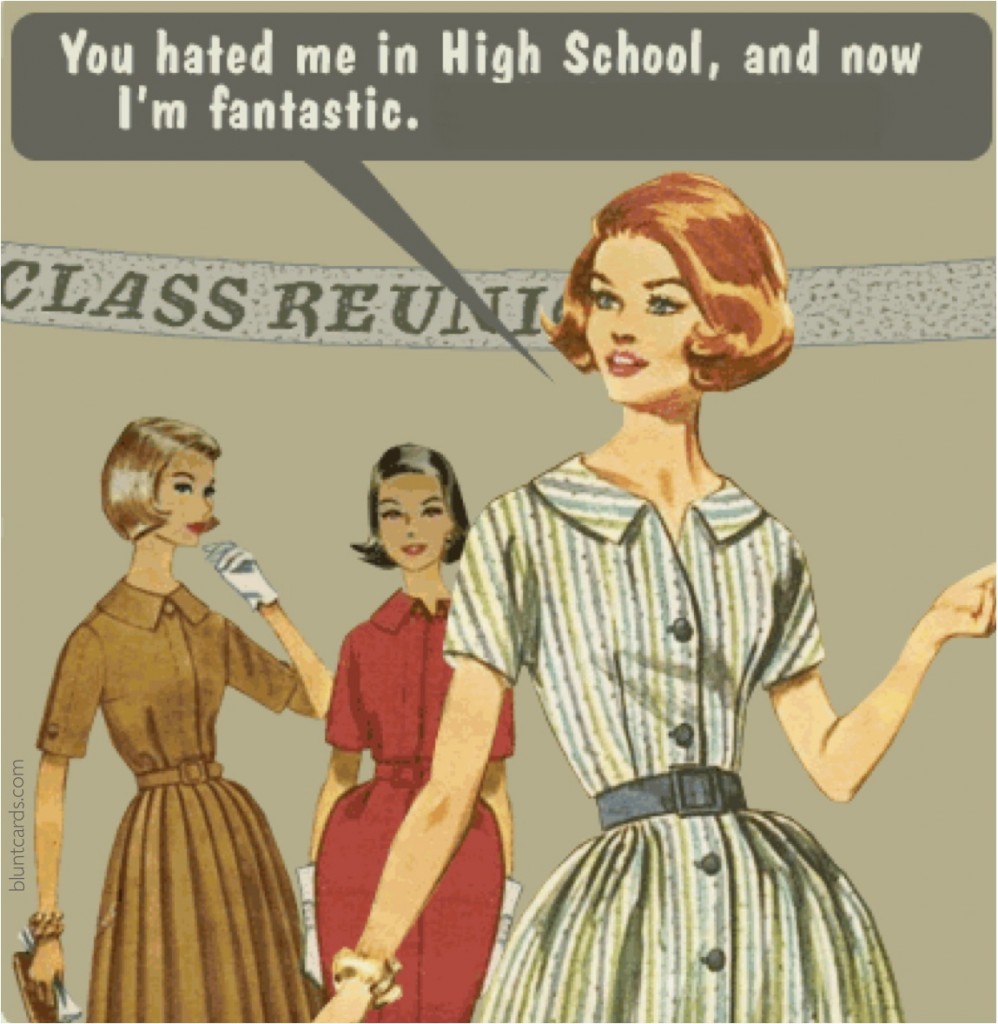 Why is it that even as adults, we judge ourselves as if we were still in high school? How could such a brief time in our lives have left us with such an enormous imprint? And what is it with labels anyway?  The Band Geek.  The New Girl.  The Popular Bitch.  The Loner.  The Jock.  The Drama Twinkie.

In her new book “The Geeks Shall Inherit the Earth,” author Alexandra Robbins examines the psychology and science behind being popular and being an outcast. Not all is bad news, however, in this trip back in time to our own high school home rooms. The encouraging news is this: the very things that set outcast students apart in high school, are the things that help them stand out later in life.

Why does this book matter?  Because if you have children, it’s a great handbook for what they may be going through now or may be headed for shortly.  It provides tips and tools for parents and kids alike.

With a son about to embark on the perilous path to high school this fall, I’d like to arm him with as much wisdom as possible.  Wisdom and also the reassurance to forge his OWN path and not be a follower. Because as Alexandra Robbins so wisely points out, it’s the quirky ones — the independent thinkers that beat to their own drum — that will inherit the earth.

Some of the best advice I’ve ever gotten is from other moms.  I’d love to hear your thoughts on the subject.

9 Teen Myths You Thought Were True

Today was a significant day for me – I became the mom of a teenager. In honor of my new status, I thought I’d share the following article on teen myths that every marketer can learn from.

9 Teen Myths You Thought Were True

A teen, a Millennial and a Mom walk into a restaurant for dinner. The Mom has a coupon for 10% off that she got for “liking” the bar’s Facebook page, the Millennial checked in on Foursquare to get a free drink, and the teen has nothing and is too busy texting her friends to care.

Teens are a unique audience. They have their own needs and social drivers that are unique to their stage in life. Many marketers assume that, because teens are young, their needs are the same as Millennials and that they will interact with brands in the same way.

New research is showing that teens have their own needs and behaviors that are different from other generations. If you’re a marketer (or even a mom) looking to reach teens, it’s vitally important that you always have your finger on the pulse of the teen audience. As technology evolves, teens are finding their own uses for it that are unique to their personal and social needs.

Myth #1: All teens want smartphones.
While it is true that teens want phones, smartphone adoption has only reached 31% as of 2010. If 90% of teens own a cell phone, why aren’t they buying smartphones? The answer is actually pretty simple: texting. Teens send an average of 3,339 texts per month, and typing that many messages on a touch screen is a lot more difficult than typing on even the most basic phone keyboard. That’s why BlackBerry is one of the most popular phones for teens.

Myth #2: Texting is the way in.
We already know that teens love to text. What some marketers fail to realize is that teens only love to text with their friends. Only 10% say they want companies to contact them via text message. There are some instances where a brand can use a texting campaign to engage this audience, but most teens see texting as “too personal,” and aren’t inviting brands into their personal space.

Myth #3: Teens use Facebook the way we use Facebook.
Don’t count on just your Facebook page to reach teens. Teens interact with brands on Facebook if they feel there is a real benefit to them for doing so. They’re not “liking” every brand on Facebook that they purchase, and even if they do, they’re not likely to come back to your page after the first visit.

Myth #4: Teens are going to join Twitter.
Recent findings from the Pew Research Center’s Internet & American Life Project show that only 8% of teens have embraced Twitter. Other studies also show that most teens don’t have any interest in joining Twitter in the future (76%). By the time they decide to use Twitter, they probably won’t be teens anymore.

Myth #5: If you build it, teens will come.
Great ideas go to waste when no one knows about them. Many marketers believe that creating a social experience for teens will spread itself through word-of-mouth and online sharing. A good social media activation can always benefit from a mass-media driver.

Myth #6: Teens are online all the time.
Teens spend roughly two hours per day on the Internet, and almost half of that time is spent on entertainment. Teens don’t need the Internet to interact with their friends — they see them all the time, and if they’re not with them, they’re texting them. If you want to reach teens online, you have to find a way to bridge their online and offline experiences.

Myth #7: Teens don’t watch TV.
Teens watch over 100 hours of television per month — most of which is not viewed on TiVo, Hulu or Netflix. They may be texting or playing games while they watch TV, but they’re definitely still watching it.

Myth #9: Teens love online video.
Teens use the Internet for entertainment, and online video is an important component of that. Branded video can be a great way to engage with teens as long as it doesn’t come off as one long commercial. Teens aren’t going to be tricked into thinking that your “viral video” is anything more than an advertisement.

Where Did Everybody Go?

I became a parent on the later side of the child-bearing age spectrum, and was always comforted by the knowledge that I had virtually unlimited resources to help me through my introduction to parenthood.  My husband had been through it before, so he was the expert burper and diaper changer.  And I am a consummate researcher, so I was confident that the limitless books, magazine articles, and blogs the world had to offer would answer most any question I could possibly have. And for the most part, they did.

But now we’re coming into the teen years, and here’s where it gets dicey, because the stakes are getting much higher.  And with the crush of new issues – puberty, hormones, dances, sexting, drugs, My Space, peer pressure, junior high, etc. – I feel like I need a crash course in this new phase of parenting.    So recently I began my research, which soon came to a screeching halt.  Where were all the tween parenting books, support groups, magazines, and blogs?  The answer is:  there aren’t any.  I’m not seeing them anywhere.  And it’s making me a bit nervous.  Because in today’s world, the transition from child to tween and teen is not what it used to be – today’s kids are more knowledgeable, more sophisticated, and . . . more everything.

My husband reminds me that we have a great kid and insists that I have nothing to worry about.  He’s probably right, but I have a feeling that parenting through the tween years and beyond is going to be really challenging, even under the best of circumstances.    It’s going to be hard work, and I have a feeling I’m going to feel like a failure sometimes.  Has anyone been there?  Your thoughts?