Marketing to the Female Brain 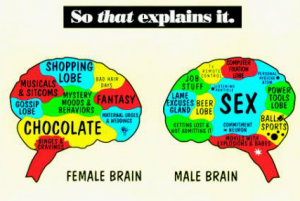 The differences between women and men are not only well-documented, but frequently at the heart of jokes and good-natured ribbing. The fact is, men and women simply are wired differently.

In human relationships, women tend to communicate more effectively than men, focusing on how to create a solution that works for the group and talking through issues. Men tend to be more task-oriented, less talkative, and have a more difficult time understanding emotions that are not explicitly verbalized.  Men typically prefer to peel away the extraneous detail and focus on the job at hand.  To women, however, those details add richness and depth and are a very necessary part of their decision-making process.  Here are some of the neurological reasons for these differences:

The male brain is organized in a neatly structured and compartmentalized way, where the female brain is more web-like and networked in structure.

Female brains have four times the number of connections between the left and right sides of the brain, which means they have to process information four times faster than men and take in four times as many signals that must be filtered.

Men have “The Big T” – testosterone – which is responsible for many of the male personality traits like self-assertiveness, competitiveness, risk-taking and thrill-seeking.  Men also tap the right side of the brain, but not as often as women, or as deeply.  While the male brain goes from point A to point B in a linear fashion, the woman’s brain operates in a more circuitous fashion.

The parts of the brain that control speech and language are more pronounced in females.  Yes, women talk more.  Typically 12,000 words a day more.  But that means, given the right circumstances, women are 10-20 times more likely to share those good experiences and become walking advocates for a brand.

Men tend to have a “fight or flight” response to stress situations, while women approach these situations with a “tend or befriend” strategy. The reason for these different reactions to stress is rooted in hormones. The hormone oxytocin is released during stress in everyone. However, estrogen tends to enhance oxytocin, resulting in calming and nurturing feelings whereas testosterone, which men produce in high levels during stress, reduces the effects of oxytocin.

Women typically have a larger deep limbic system, which promotes bonding and nesting instincts, and enables women to better express their feelings than men. The down side to this larger deep limbic system is that it also opens women up to depression, especially during times of hormonal shifts such as after childbirth or during a woman’s menstrual cycle.

One of the key ways that marketers can better engage with women is to understand what makes her uniquely female.  And understanding that doesn’t mean they will alienate men in the process.  On the contrary, while women expect more from the brands and products they do business with, men ultimately benefit from those high expectations as well.  So if a brand meets the needs of the woman, typically it will exceed the needs of the man.

To those marketing to women: Are you taking into consideration the differences between men and women when targeting women with your brand message?